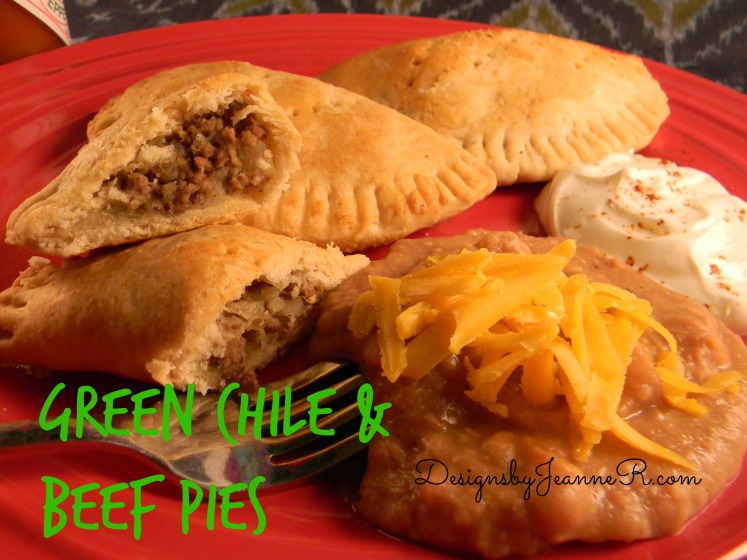 Empanadas, pasties, pies…these are known by many names, but are they different?  In my quest to make these little gems for dinner, I found a delicious recipe for empanada dough from Mark Bittman’s book How to Cook Everything.  This dough was superb…flaky, tender, light & delicious.  It got me thinking, however, that calling this an empanada might be a misnomer.  I’m not really sure, but doesn’t my description (and having tasted this last night) seem more like the crust that would be used for a pot pie, or a quiche for example?  I’d appreciate your input – aren’t empanadas a little more bread-like, and less pastry-like?  Then there’s the option of baking or frying, & perhaps that’s where the difference (I baked mine, per his recipe) comes in.

I’ve never had a pasty myself, but I remember a friend from Michigan making them for her son’s school lunch (lucky kid!) & they looked really good.  I found the recipe she had given mom the other day, and it had the same ingredients, only the water was boiled, and baking powder was not used.

I know the history behind pasties, that miner’s ate these back in the day, because they were an easy to manage “package” – a compact meal of meat, vegetables, & bread.  Hey, maybe this was an early “fast food” of sorts!  BTW, my husband is a big fan of Alton Brown’s Good Eats, & he said Alton did an episode on pasties…I’ll have to see if I can dig it up!

So along with Bittman’s dough recipe,  I’m not going to list a recipe for the filling since it was so simple, but I basically browned the ground beef & mixed it with cooked potatoes, onion, & roasted Anaheim peppers (I diced the vegetables quite small) & seasoned with salt, pepper, garlic, cumin, chili powder & a little chipotle powder.

Mix the dry ingredients together in a food processor.  Add the shortening & pulse until the shortening is incorporated & the mixture is crumbly.  With the machine running, add up to the 1/2 cup of cold water, or until the dough forms a ball.  The dough should be fairly dry. Knead by hand until smooth, just a minute or so.

Divide into 10 – 12 pieces, roll into balls, and wrap in plastic or cover with a damp towel and let rest for at least 20 minutes.  On a floured surface, roll each piece into a 6-inch circle, adding flour as necessary.

Preheat the oven to 450 F. Place a couple of tablespoons of the meat mixture into the center of each circle.  Fold each circle over in half, & seal the seam with a little water and press with the tines of a fork to close. Put on an ungreased baking sheet (I used parchment paper) & brush lightly with milk. Bake until the dough is golden brown and hot, about 20 minutes. Serve immediately or at room temperature.

As you can see, Gene smothered his with cheese (what else is new?!) I served this with Tabasco sauce & sour cream on the side as well as creamy refried beans.

While I was sealing these up, I was visiting with my niece Emily on the phone.  I told her I was gonna name these “one handed empanadas!”  Well, at least you know these are simple enough that you can multi-task while making them!