Recipe from the collection of:  Designs by Jeanne R

Wow, here’s a recipe that takes me back, it was an absolute staple in our home, and it comes from my Mom’s sourdough cookbook that I mentioned in an earlier post.  This has and always will be my very favorite cinnamon roll recipe!  Just remember that if you’d like it for breakfast, you’ll need to start the “sponge” the night before.  Believe me, it’s well worth the planning!  Let’s get started…

Combine the starter, evaporated milk, and the 2 cups of flour in a large bowl; cover and leave at room temperature overnight.

The next morning, beat together:

Then add this to the sourdough mixture.

(I like to add a little cinnamon to the dry ingredients, maybe 1 teaspoon or so).

Mix the dry ingredients into the wet, then turn onto a floured board.  Knead until the surface is “satiny” and doesn’t stick to the board.

Brush the dough with about 2 tablespoons melted butter, then sprinkle with a mixture of 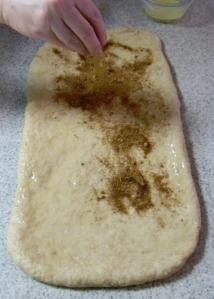 Roll up the dough, lengthwise

Dip each side in some additional melted butter, then place in a 9″  baking dish

Cover loosely, and let rise in a warm place for about 1 hour or until nearly doubled.

Remove covering, and bake at 375 degrees For 25-30 minutes, or until crust is dark golden.

I make a simple glaze, mixing together about…

milk, a little at a time until you reach the desired consistency

Pour over the cinnamon rolls while they’re still warm, save any extra to serve on the side. 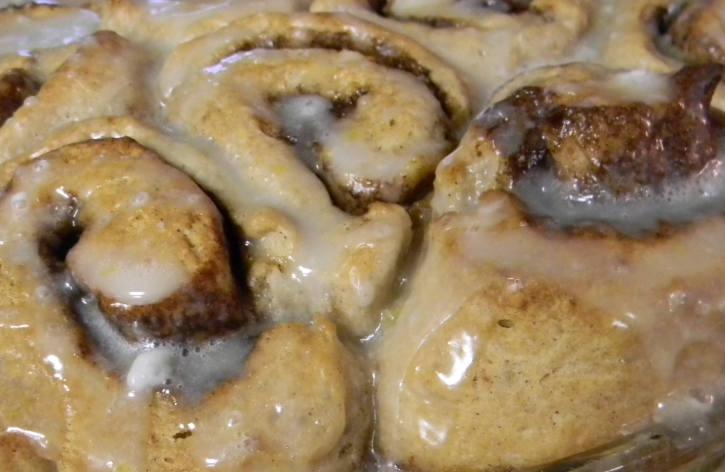